Cash Rules Every Song Around Me

The American Society of Composers, Authors, and Publishers recently sued nine venues around the country for playing members’ music without paying. The Grand Nightclub in San Francisco is one of them. 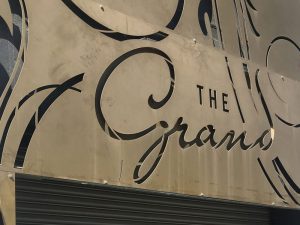 We’re living in a golden age for live music.

Seemingly every week, new festivals are sprouting up around the world, in far-flung places such as limestone quarries in Sweden or the middle of the desert in Arizona. Bands are also touring more, often looping around the country multiple times a year in the hopes of playing as many shows as possible. Even older acts like TLC, the Monkees, and Bush have reformed and started playing shows again.

As for why more musicians than ever before are performing live, the answer is simple: money. Ever since streaming sites like SoundCloud and Spotify entered the picture — in 2008 and 2011, respectively — the record industry has been in a state of flux. Sales are declining as listeners opt to stream rather than purchase their music, and in 2016, streaming reigned as the No. 1 way that people consume music, according to Nielsen Media Research.

A large number of artists, especially older acts and bands that have broken up, rely on royalties they earn from licensing their music to streaming services. The pay is paltry — streaming one song can pay anywhere between $0.0003 to $0.007, depending on the platform — but it’s better than nothing, especially for songwriters and producers who don’t have the option of touring or playing festivals.

Streaming isn’t artists’ only source of royalties. Any business — be it a restaurant, bar, or nightclub — that wants to play music at its venue must also pay a fee. Purchasing a Spotify Business account is one way to do this, but the majority of establishments opt to get licensed by the American Society of Composers, Authors, and Publishers (ASCAP).

The organization — with 600,000 members and more than 10 million licensed works — functions as the middleman for artists and businesses. It is through ASCAP that musicians receive royalties, and it is up to them to make sure that streaming sites and businesses pay members for using their music.

Most of the time, this system works without fail, but every now and then, there are a few businesses that shirk licensing fees and play ASCAP members’ music for free. On May 3, ASCAP announced that it was putting the kibosh on this behavior and taking legal action against nine venues nationwide that were doing just that.

Located in SoMa, The Grand is an upscale, Las Vegas-style nightclub with bottle service, V.I.P. areas, and lingerie-clad servers. Radio personality Chuy Gomez often hosts parties there, and a range of local and well-known DJs, like Mind Motion and Oasis, spin there on Friday and Saturday nights. On a recent weekend, Bay Area DJ Acme headlined a Latino night at the club, playing a medley of cumbia, merengue, and bachata tunes. He also played a reggaeton remix of Beyonce’s ASCAP-licensed hit “Single Ladies,” which The Grand didn’t pay a cent to use.

Not only is this illegal — under the Copyright Act, businesses must receive permission from songwriters before using their music in public — but it’s just wrong.

“The whole purpose of ASCAP is to ensure that when a songwriter’s music is being played in public, they’re being properly compensated,” says Jackson Wagener, ASCAP’s VP of business and legal affairs. “It’s also not fair to their neighbors and other business who are paying to play artists’ music.”

Records show that The Grand was licensed by ASCAP back in 2008. But “at some point a couple years after that, they simply stopped paying,” Wagener says — and for a good two or three years, The Grand continued playing members’ music without paying fees. After multiple efforts to get in touch with the club and educate them about the importance (and legality) of paying for music, ASCAP decided to terminate its license.

To prove definitively that the venue was playing members’ music at its events, ASCAP hired a private investigator to attend the club and take notes on the songs that were being played, Wagener says, adding that the investigator’s findings proved what ASCAP had suspected and “formed the basis of our lawsuit.”

But before ASCAP resorted to legal action, it made one last effort to settle the matter amicably.

“We sent another letter and made another offer to settle the action, get them a license, and work out some payment from past periods,” Wagener says. “We never heard back from them.” (SF Weekly’s repeated phone calls, emails, and texts to The Grand were also not returned.)

ASCAP is suing The Grand for three different claims of copyright infringement based on the findings of the private investigator they sent to the club. While Wagener says “there were many ASCAP works played that night,” the organization is only filing suit for three songs, because their goal is to educate The Grand, “not put them out of business.” It’s up to a judge or jury to determine how much the Grand should pay for each infringement, which can cost between $750 and $30,000 per song.

Though ASCAP views litigation as “an extraordinary step,” it is no stranger to taking legal action. As recently as Jan. 31, it filed lawsuits against 10 venues for copyright infringement. Due to the organization’s efforts to communicate and educate business owners, Wagener says ASCAP was able to avoid taking many of those cases to court and “almost all of the lawsuits have resulted in an amicable settlement.”

In fact, as ASCAP’s experience with The Grand proves, it often spends years trying to solve the issue on its own before pursuing litigation. And even then, efforts are made to avoid a lawsuit. With ASCAP’s recent spate of nine lawsuits, Wagener says they’ve “already settled at least one and are talking about a settlement with several other owners.”

“Our goal is to work out what’s fair, not put people out of business,” he adds. “We view litigation as a last resort, but at some point, when you’re not paid, you have no other choice.”

Guerrilla Public Service Can Make the World a Better Place

Regular people are taking it upon themselves to make fixes and repairs around their cities, from cutting back overgrowth to filling in potholes. OK Whatever The next time you walk through your neighborhood, observe your surroundings. At a glance, everything might...