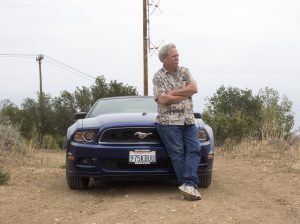 Hans Laetz and his “KBU” car

The KBUU-FM radio studio is in a ranch-style tract house, on a cul de sac on one of Malibu’s few suburban-style streets. In what used to be Emily Laetz’s bedroom, the detritus of a recently moved-out kid is everywhere. Puka shell necklaces hang near the door and a stack of Malibu High School yearbooks is piled on the desk, along with an LP (The Doors’ Greatest Hits) and a wadded up clump of bathing suit. On the wall are a tide calendar from 2011 and a homemade a poster that says “Big Dume September 2007.”

In the middle of the room are two racks of gear, diodes lit and blinking, volume meters flashing, data lines flickering. At a white desk surrounded by computer screens, speakers and a 20-year-old radio console sits Emily’s dad, Hans Laetz. A greying 58-year-old of average height, with a thick slab of mustache and a wardrobe of Hawaiian shirts, Laetz is the guy behind “Radio Malibu,” 97.5 KBU. (He was also formerly this writer’s editor at another publication.)

He perches on a stool and leans into an Electro-Voice RE320 mic to record his PSAs and newscasts. He attempts six different voices — “I don’t always want to sound like me” — and launches into a promo using what he fancies to be his “sexy FM voice.” He reserves the “KNX news voice” for the newscasts between 6:45 and 9:15 a.m., and the “Irwindale Dragway” voice for PSAs.

Laetz, his wife Diane, and a handful of volunteers run the station. “We’ve heard great voices at a restaurant and forced them to come to the studio to record promos,” says Laetz. “We are not above dragooning volunteers.”

Not only is it the only local radio station in Malibu, but it’s the smallest radio station in greater Los Angeles in terms of wattage, and will be the smallest NPR affiliate station in the world, once Laetz finds a place to put a 27-foot NPR dish in Malibu. “We’re launching this in stages,” says Laetz, with the next big step being the addition of NPR powerhouses Morning Edition and All Things Considered. A Sunday night jazz show has just kicked off, and Wednesday nights will soon be dedicated to Americana music. Malibu author and Beatles trivia expert Brooke Halpin has a four-hour show on weekends, and three Malibu locals are starting music shows, including the former music teacher at Malibu High School.

It wasn’t easy getting the station started. Because of the Santa Monica Mountains, FM reception in Malibu is dicey. “We’re in a weird place,” Laetz says, demonstrating his point by turning the dial of a radio. Static engulfs the airwaves on all but two stations. “We really don’t get any FM out here.”

Under FCC regulations, Malibu is in the Los Angeles market and signals there have to yield to signals from as far away as Tijuana, Santa Barbara and Riverside. It’s virtually impossible to find an open frequency to host a new station. And yet, because the reception is so bad in Malibu, it’s more like every frequency is available. “Notice, the whole dial is empty,” Laetz says. “We don’t overlap with the L.A. market because we don’t pick up L.A.”

Once his engineer found a possible frequency, Laetz had to place his 50-watt transmitter somewhere where it would not blot out nearby stations on the dial. But finding a spot in Malibu to put an 85-foot-pole was impossible. The Coastal Commission has a firm 28-foot height limit.

After four rejected tower applications, Laetz was ready to throw in the towel last summer, until he found a spot at the top of a lone mountain that worked.

KBU’s signal range is only six miles, but listeners can stream the station online from anywhere in the world. Laetz has feedback from listeners in England, Germany and Chile, as well as in Malibu, where a woman at the Trancas Country Market recently recognized him as “the radio station guy.”

The station’s target audience is “mothers with teenaged kids in the SUV,” he says. “That’s what you see mostly out here. There aren’t really a lot of men in Malibu in the daytime.” As a result, the daytime alternative rock selections on KBU are “a little more poppy” than Laetz’s tastes. KBU subscribes to the same music services that ALT 98.7 and KROQ use, but Laetz is proud that he’s added songs to KBU’s power rotation before the L.A. giants. “We play more alt music than ALT 98.7 and we play more new music than KROQ,” he says. And because they don’t have to break for commercials, “I get to play weird stuff, like alt music from the ’60s.”

Laetz not only programs Wilco and Jack Johnson, he plays the whole Jeff Tweedy catalog. The alternative playlist reaches back through Joni Mitchell and Bruce Springsteen to ’60s bands like Spirit.

Although Laetz is a big Americana fan himself, he says alternative rock is more fitting for a full-service Malibu public radio station. “It crosses generational lines,” he says. “Teenagers who listen to head banger music can deal with alt-rock and their parents can, too.” During the evenings, though, the local programmers get much more leeway to play what they want.

In the next year or so, Laetz hopes to move the Radio Malibu studio out of Emily’s room and into a more permanent location, where he can hire an operations person and let people do live shows. Until then, it’s all on computers, with DJs recording their shows at home. “With the cloud and with technology, we really don’t need an actual studio,” he says. “We can operate a radio station with everything we need from home.” 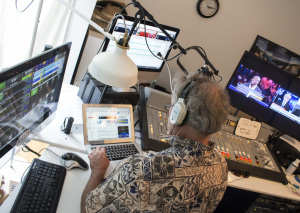 Even running the station out of his daughter’s old bedroom, Laetz estimates that he has sunk about $70,000 of his own money into startup costs. “I’ll never get that all back,” he says, “but hey, I’ve got a radio station down the hall.”