The Third Eye Blind frontman dishes on the band’s next album, trolling Republicans, and becoming ‘a whole person.’ 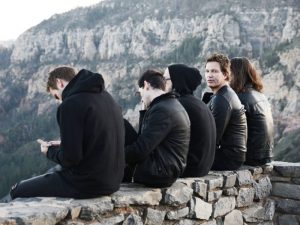 Interviewing Stephan Jenkins is like herding cats or trying to get my very untrained dog Mischa to do a trick. He evades questions, changes the subject, gets easily distracted, and takes minutes to finish sentences, often using as many as a dozen adjectives to describe one thing.

“This isn’t really an interview,” Jenkins tells me shortly after we meet up. “We’re just chit-chatting.”

It’s a little after 5 p.m. in the middle of the week, and we’re sitting on the patio at Zeitgeist, a metal bar in the Mission, because that’s where the Third Eye Blind frontman suggested we go.

For more than two hours we sit there, facing each other while seated on the same bench — because the din from the crowd and the live thrash band is so loud that our knees have to be touching for us to hear one another.

“I feel self-conscious,” Jenkins complains, after I ask him to hold my recorder closer to his mouth so that it picks up what he’s saying. “I feel like, ‘Is this really what my voice sounds like?’ Fuck!”

He’s joking, of course. For more than two decades, Jenkins, 52, has subsisted off the charms of his rubbery, boyish voice, which sounds unchanged from the band’s self-titled debut album (which turns 20 on April 6). For proof, just listen to Third Eye Blind’s 2016 EP We Are Drugs, a sleek-yet-frenetic guitar-rock record that Jenkins says was named after “[Salvador] Dalí, not Dolly Parton. Although I love her, too.”

But sonic changes are coming, he warns me, and fans will be able to hear those deviations this summer when the band releases its newest project, Summer Gods.

For a band that has historically spent two to six years between albums, Third Eye Blind’s recent spate of releases — which, with Summer Gods, translates to three new records in just as many years — is surprising. No doubt, the quintet’s heavy touring schedules and frequently changing lineup have helped slow down its productivity over the years. But Jenkins, a notoriously slow and methodical songwriter, is also partly to blame.

After commenting on my black Dr. Martens boots — “I like your D.M.’s. They’re really the only pair of shoes.” — Jenkins explains that he’s been able to work faster in recent years thanks to an emotional breakthrough of sorts.

“There has been a wedding of subconscious childhood trauma that has been integrated and knitted together, and it has helped me feel more like a whole person,” he says, using his hands for emphasis. “It means I trust myself a lot more.”

And it’s not like the delays in album drops have deterred Third Eye Blind’s fans from loving the band. Almost three million people listen to them every month through Spotify alone, and it’s commonplace for devotees to contact Jenkins on Twitter and tell him they’re thinking of getting “I love #3eb” tattooed on their body “somewhere” or that they’re embarking on a six-hour drive during which they’ll only play “ ‘Semi-Charmed Life’ on repeat.”

This is the answer Jenkins gives me when I ask him why he thinks Third Eye Blind has been able to continually grow its fan base over the years. I can only assume he’s referring to the band’s longstanding commitment to working with charities and speaking up about political and social issues.

From Third Eye Blind’s very first album — which included “Jumper,” a song about preventing a gay, HIV-positive teen from committing suicide — to We Are Drugs — whose last track, “Cop vs. Phone Girl,” touches on police brutality and the Black Lives Matter movement — the band has made it a point to address issues like racism, homophobia, and sexual abuse in their music.

Not that Jenkins is willing to acknowledge this. Though his Twitter page is rife with anti-Republican and anti-”45” rhetoric — instead of calling the president by his name, Jenkins calls him “45” and requested that I “please write it that way” — he thinks there’s a division separating his music from his ideological beliefs.

“I don’t preach at shows,” he says. “And I don’t write as a social activist. I write based on emotional impact.”

Still, any fan surely knows what they’re up to beyond merely releasing new singles and playing shows. They probably own one of the “Raise Your Hands If You Believe in Science” T-shirts that Third Eye Blind sold in August 2016 to support Hillary Clinton’s campaign, or applauded them when they had trans youth introduce them before playing a show in North Carolina.

And there’s absolutely no way that a Third Eye Blind fan could have missed the headlines about the band’s wonderfully catastrophic “Musicians on Call” charity show at the Rock and Roll Hall of Fame in Cleveland last July.

After learning moments before their set that the event had ties to the Republican National Convention, Jenkins — who famously declined an invitation in 2012 to play a private party for the organization, and then wrote about it for The Huffington Post — decided to troll the event. He changed the entire setlist, opting to play only politically charged, LGBTQ-leaning songs, like “Non-Dairy Creamer” from the 2008 EP Red Star, for the booing audience.

“I didn’t care at all,” says Jenkins, who admits that the last time he got booed during a show was when he was 15. “I wanted to burn the whole thing down. Not literally, but I wanted to trash that gig. At first, when I went out there, I was like, ‘What are we going to do because we have been duped?’ And then I went, ‘No, we have not been duped. They’ve been duped. We did not fuck up by taking this gig. They fucked up by giving it to us.’ ”

← Waiting For the Green Light Sons of Mischief →