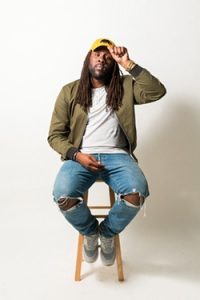 On a recent Saturday night, upwards of a hundred millennials gathered in an Emeryville warehouse to gleefully chant “Got me feeling like a dad right now.”

Leading the chorus was a 6-foot-3 man with chest-length dreadlocks flecked with gold beads, dressed in an unassuming blue anorak and a solid yellow baseball cap. His name is Rexx Life Raj and he alternated between singing the chorus and rapping the verses to the song, called “Father Figure.” The warehouse gathering and the dad-declaring crowd was in celebration of Raj’s debut album — also called Father Figure — which came out June 23.

Raj, 26, writes all his own material, and occasionally mixes and produces his tracks as well. But what he really has a knack for is coining catchphrases and stick-in-your-head hooks.

Each song he performs has at least one line the audience belted out like an anthem, such as “I think I might have a mother-fucking problem / Crushing Adderall and marijuana!” or “Bitch, I’m a dad now!” (A “dad,” in Raj’s parlance, is someone who is “a boss,” not a literal father.)

Calls for “more!” and “again!” rang out when he finished “Shit N’ Floss,” what was supposed to be the last song of the night. Raj obliged, signaling the DJ to play the track one more time. Everything about this night had been a long time coming for him and he was willing to prolong it for as long as possible.

Born Faraji Wright, Raj grew up in Berkeley and started rapping in middle school, originally spitting lines written by his older cousin before launching into his own material.

While at Berkeley High School, he joined a number of hip-hop crews, rapping over beats culled from sharing sites like SoundClick or instrumentals stripped from mainstream songs by artists like Britney Spears or Snoop Dogg.

He attended Boise State University on a full football scholarship, but claims he never had aspirations to go pro, even though others, including his family, expected him to do so.

“I was the guy who just happened to be good at it,” he says. “I was just rolling with it, and after I got my degree [in communications], I was over it. I had made up my mind that I was going to do music no matter what after it was over.”

After he graduated, he moved back in with his parents and started working as a deliveryman for his father’s courier business — a job he’s still doing.

He took “a few years getting back to regular life,” but started to focus on music more seriously toward the end of 2013. He dropped three albums in the span of two years, and in 2014, signed to Empire Distribution, a record label based in San Francisco.

Father Figure is an ode to Raj’s dad, a West Oakland native who started the courier company “damn near 30 years ago” and raised his son on a heavy diet of life lessons and platitudes, Raj says.

“That’s like his language,” he says. “I look at a father figure as somebody that’s showing you the ropes, giving you the game, and teaching you lessons and stuff. And that’s all my dad did.”

As such, Father Figure is rife with adages and truisms. “Young Wardell,” a song about Golden State Warriors player Steph Curry, is both a paean to the point guard and a metaphor for taking chances — or “shots” — in life. “Handheld GPS,” an acoustic guitar-laced meditation on the pitfalls of being obsessed with technology, urges listeners to disconnect, think for themselves, and “lead by demonstration.” And “OJW3,” which Raj wrote for his dad last Father’s Day, is both an ode to the lessons he taught him and a resuscitation of them.

Father Figure never comes across as preachy or self-righteous. Raj makes it clear that he is fallible and still figuring things out. After every lecture, a confession follows: Raj is addicted to Adderall, coffee, and weed; he used to sleep on a futon in the living room; sometimes he’s too “in his feelings like Aubrey Graham”; and he grew up judged for his dark skin color and “class clown” behavior.

Like Kid Cudi, one of his favorite artists, Raj’s goal with his music is to come across as both relatable and human in his music.

“I feel like there’s different types of rap,” he says. “You can just make slaps where it sounds good and feels good, but there’s also that music where it’s like, ‘This is who I am. Let me tell you a story about my life.’ And that’s the kind of shit I make because I feel like that’s when you can connect as an artist.”