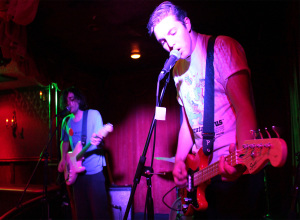 The Australian band Step Panther arrived in Fullerton a few hours before their show at The Continental Room, so they decided to head to Costco. “We thought maybe they had guns there,” explained singer Stephen Bourke. “Yeah, we just wanted to see some guns,” the guitarist, Zach Stephenson added.

They’d flown in from a city “near Sydney” a few days earlier and were staying in an Air Bnb in Los Angeles. So far, they’d visited Santa Monica and Venice beaches and, of course, Hollywood. It was their first visit to the City of Angeles, let alone the West Coast, and it kind of reminded them of a mash-up of Sydney, Perth and Melbourne, “just with more freeways and wider roads,” said Bourke.

Earlier that day, they’d gone shopping for guitars because they hadn’t brought their own. They had tourist visas, not performance visas, explained Bourke, and they were scared of tipping the government off to the fact that they were actually touring the U.S.

Bourke: “We just heard a lot of bad stories from other Australian bands warning us to not bring anything…. I guess it sounds stupid now.”

Bourke: “We should have brought them.”

In a few days the garage surf punk band would be playing at Burger Records’ yearly festival, Burgerama, but that night, they were playing in a show for Burger’s sister label, Wiener Records.

Wienerama, as the night was dubbed, featured, in addition to Step Panther, a trio of local bands, The Mozzies, The Gromble and Death Lens.

Sitting at a red leather booth the entire night was Wiener Records’ head guy, Danny Gonzales. He was manning a metal briefcase filled with five dollar cassettes, stickers, CDs, and pins. “The point of tonight is to have fun,” said the 6’8 Gonzales who was decked out in a jean vest plastered with pins. Since Burgerama was only a few days away, he said, he wanted to give Wiener bands a little of the limelight, as well.

Like most shows, the sets were a bit behind schedule, but other than that, the night went on without a hitch. There was a raffle (prizes: A Wiener Records tee and tickets to Burgerama) and an enthusiastic crowd of youngins in their early twenties. More than a few girls took selfies between sets, using the stage’s maroon velvet curtain as a backdrop, and there was a lot of head bobbing and knee bending.

The garage band, The Mozzies, were the first to play, followed by The Gromble, a pop rock band hailing from Laguna Nigel. “We’re kind of like the guys out in this scene,” said Trevin Eck of The Gromble. Asked why he felt that way and Eck explained that the bulk of their music, or at least their cassette tapes, have been sold to Japan. “Somebody likes us somewhere,” he said.

The Gromble met Gonzales five years ago at one of their shows at Gypsy Lounge in Lake Forest. “Nobody was there and it was horrible,” said band mate Spencer Askin. “And he came up to me and he’s like, ‘Hey, do you guys have any merch?'” The next time the band saw him was at a Halloween party where Gonzales was dressed as a giant vagina. “We’ve been friends with him ever since,” said Askin.

The night ended with a set by Death Lens, a garage band who’s been told they sound like “punch drunk Buddy Holly.” By the end of the night, all of the band’s Wiener Records-produced tapes had been sold and the last remaining cassette was in one of the band members’ cars.