Jennifer LeBarre Makes Sure That Oakland Students Get A Healthy Lunch 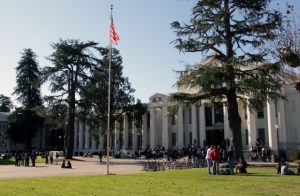 The bell rings— a prolonged buzzing signaling the end of class.

Within moments, hordes of students come rushing into the Oakland Tech cafeteria, sidling up in line in front of the kitchen and dropping their backpacks and jackets off at one of the circular red tables. You can tell they’re hungry. They joke and they jostle and some try to cut ahead in line by joining up with their friends.  Pizza and hot wings are popular entrees, as evidenced by their almost daily appearance on the menu—but today’s piece de resistance is the big pile of strawberries in the salad bar.

“Hey, hey, hey! Only four strawberries a person,” says Sharif Patterson, a transitional trainer for the special-needs students, who’s volunteered to watch over the salad bar today.   And next to her, arms folded, dressed entirely in purple, is Jennifer LeBarre, the director of nutrition services for the Oakland Unified School District, who is on a site visit at Oakland Tech this Wednesday afternoon.

“Every week I just go out and I try to get to as many schools as I can,” she says. “It’s one thing to be at the desk and hear from people, but I really want to see how things are operating.”

LeBarre stands next to the salad bar, studying the students as they clamor for the black plastic salad tongs. In her eight years serving as director, the salad bar is one of her proudest achievements. Originally started as a pilot project in select schools to increase students’ exposure to fresh fruits and vegetables, the salad bar became so popular  that it has since spread to 62 schools.

“The salad bar is smacking,” says freshman Tyree Hasan, 14. “I swear, it’s so good.” He’s piling peaches and strawberries onto his plastic plate.   Patterson says the students will use the salad bar ingredients for all kinds of dishes, including chicken salad and pasta entrees.

“They like to take the mushrooms and olives and sprinkle them onto their slices of pizza,” she says.  But fruit still reigns as the most popular item, which is why she occasionally needs to set limits on how many pieces of fruit students can take.

As the pile of strawberries dwindles to a clump, some students become anxious and try to cut ahead one another in line. When only juice remains in the bin, Patterson reaches below the bar and dumps in a new load of the red stuff. The students cheer, Patterson reminds them to take only a few, and LeBarre watches off to the side, smiling. The fact that strawberries have become a coveted item at this cafeteria—fresh, vitamin-rich strawberries— is something that makes her unequivocally happy. A large part of her job, she says, revolves around meeting state and federal requirements for school nutrition, but if the food doesn’t appeal to the students, the requirements don’t matter much.

It’s a fine line to walk, but somehow LeBarre does it.

“When I first started, we would open up a bag of Flaming Hot Cheetos and pour nacho cheese sauce into the bag, and that’s what we’d serve our kids,” she says, shaking her head.

It isn’t an easy job, but this fall LeBarre received special recognition for her work: an award from the nonprofit California Endowment as one of six “Health Happens Heroes” across the state who’ve made special progress in improving the food served in academic settings.

But for LeBarre, even the little things—like watching public school teenagers pile strawberries and peach slices onto their plates— can sometimes be enough.

On any given day, the students at Claremont Middle School are offered a choice of two different entrees.  Today, because it’s Meatless Monday, their options are a bean and cheese burrito or a quesadilla. Seventh grader Jonathan Martinez and his friend Waldir Huezo have both chosen the bean and cheese burrito. “The burrito is actually pretty good,” says Martinez, before hungrily leaning over the Styrofoam tray and taking a huge bite out of the stuffed tortilla. 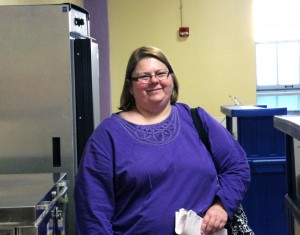 Jennifer LeBarre’s dream is to open a district farm in the lot next door to OUSD’s central kitchen that could be used to grow food for the school meal program, as well as serve as an educational setting for students.

Meatless Mondays at Claremont are the one day each week when only vegetarian meals are served at the cafeteria. Inspired by the international Meatless Monday movement, a non-profit initiative of the Monday Campaigns Inc. that encourages people to refrain from eating meat on Mondays, Jennifer LeBarre decided two years ago to start her own Meatless Mondays in public schools throughout Oakland  as a way to introduce students to healthy, yet delicious, non-meat foods.

This year, Meatless Mondays are only held in middle and elementary schools—a decision spurred in part by economic pressures, but also due to the fact that non-meat dishes just weren’t very popular among high schoolers. If there’s anything LeBarre has learned in her eight years as nutrition director with OUSD, it’s that high school kids like their chicken and beef—a lot—and she is hard-pressed to convince them to do without it.

“It becomes difficult, the older they get,” LeBarre said, referring to the challenging task of feeding students at the district’s 16 high schools. Not only is she mandated by law to feed them more food (remember puberty?), but she must compete with outside food vendors, such as fast food restaurants and corner gas stations, that might lure her customers away before and after school or doing lunch.

“We can’t compete with Burger King,” she said. Mandatory nutritional standards and budget limitations dictate her menus. “So that’s a challenge that our cafeteria managers have to deal with for the older grades: how do you get the kids excited about the lunch program, while still meeting all the requirements of the lunch program?”

LeBarre never imagined she’d make a career working in nutrition services. Even though she worked in college for the dining services at UC Santa Cruz, she majored in history and psychology and was at one point considering graduate school. But her part-time job turned into a full-time job, and a few years later, she switched to the University of San Francisco, where she became manager of the campus dining program.

In 1997 she joined OUSD.  “I went from being a college lunch lady to a real lunch lady,” LeBarre likes to joke.  But in reality, the transition to a K-12 public school system was both sobering and gratifying, she said.

“It was just so powerful to see how the meal program was for kids,” LeBarre said in a recent interview in the Oakland Tech cafeteria. “You went from college kids who were whining because they had 15 choices a day—but then you get these students, who were grateful for the one choice that they had, and that you knew they needed.”

It was a job she felt good about doing; a job with a purpose. “If you don’t have the basic needs of food in your stomach, you cannot learn,” LeBarre said.  “So we need to make what we give our students the best possible meal, so that they can have the best possible education. That’s kind of what drives me now.”

When she first started as director, she was nervous. “I was just, like: ‘Let’s just get the food out to the students,’ “she said. “That was just our only goal, day to day.”   But as she grew more comfortable with her new role, she started trying out new items and making constructive changes to the meal program, such as eliminating junk food and adding more fresh fruits and vegetables.

In addition to Meatless Mondays and salad bars, LeBarre started a program that hosts weekly farmer’s markets at 22 schools throughout the district.  She opened two breakfast programs, Second Chance and Grab’n’Go, that increase the selection of breakfast foods and give students more time to eat breakfast before the school day begins.

She also makes a concentrated effort to purchase as many local ingredients as possible—her goal is at least 25 percent locally-grown salad bar produce, and someday she’d like to add locally raised and processed meats.  But costs can make this hard at times. “We’re kind of going after the proverbial low-hanging fruit when it comes to local,” she said, “and we can really identify produce as a good means of achieving that.”

The funding for Oakland’s Nutrition Services, which serves about 30,000 meals a day, comes from three sources: cafeteria sales, and reimbursement from both the state and federal governments. These funds are used not only to buy ingredients, but also to pay the salaries of the dozens of school cafeteria and central kitchen employees who both prepare and serve the food.

But while federal requirements have been fairly easy to meet—the $11 billion national school lunch program has remained relatively unchanged for the last 15 years—state requirements are a whole other matter, LeBarre said. Unlike the former, which dictates how much food can be served, state requirements tend to focus more on what can and cannot be sold to students. For the most part, this has not been a problem for OUSD, LeBarre said, because they have been ahead of the curve for many of the state’s initiatives, such as the 2005 ban on selling sodas and non-reduced fat “baked” chips from schools.

What’s been harder, though, is funding.  The state is simply not a reliable funder, she said, and in recent years has often run out of money to reimburse the district fully.

Part of the reason is the economy: the number of students needing school meals increased and the state simply could not keep up.  In April 2009, for example, the state’s funding stopped two months before the school year ended, leading to a $200,000 loss in meal program funds for the district. Some of the cutbacks she has made to offset her losses include closing the salad bar early at some schools, limiting Meatless Mondays to lower grade levels, and focusing more on pre-packaged foods. LeBarre is not fond of these moves, but it was what was required at the time to get by, she said. “I always think that there’s so much more that I can do here, and I just look at every year like, ‘Okay, what do we do next?’”

The “Health Happens Heroes” award that she received this October in conjunction with National School Lunch Week, however, has helped her to view her accomplishments in a different light. In fact, LeBarre, who said that she was “honored” and “excited” to receive the award, views her newfound role as a “Health Hero” as something more than a title. For her, it’s a reminder. “It kind of brings you back to center,” she said, “that this is why we’re here—for the kids.”

–Published on OaklandNorth.net on January 5, 2012–